With Waterfront Park identified as a great location for a sculpture, the City of North Vancouver approached the North Vancouver Arts Council in the summer of 1983 to undertake a sculpture competition for the park.  Council committed to some funding, with the remaining left as the responsibility for the Arts Council to raise.  In a province-wide competition, the NVCAC developed a broad theme for submissions, “Visions of North Vancouver”, with no pre-conceived notions of what the final product could be, leaving that to submitting artists and the jury.

The jury considered 76 submissions, with Douglas Senft winning the competition with his proposal for Cathedral.  The sculpture was described as “an organic sculpture involving earth forms and steel frames and provides a walking experience through linear frames shaped to simulate the North Shore mountains.  It also provides views both of the City of Vancouver and the mountains.” (NSNews – 28April 1985)

“Pedestrian traffic walking the pathway south to north will be faced with a dramatic view of the North Shore Lions framed in the arches, while those going in the opposite direction will walk into a sweeping panorama of Vancouver and its waterfront.”  The original plans for the sculpture were to include pipe lighting to illuminate the arches, but that element was not realized.

The sculpture had been selected, but it would take one year to build, and the money wasn’t all in place, and this seems to when the controversy started.  A controversy that played out in the public eye, visible in North Shore News headlines from the fall of 1985: 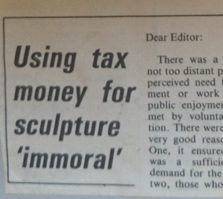 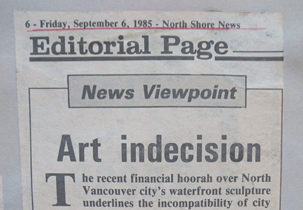 Then, moving close to the deadline of September 1, 1985 (the artist required 1 year to build the sculpture), the process turned a corner and things moved ahead:

The sculpture was built and installed the following spring, with (pictured below left to right) NVCAC President, Joseph Cantafio, sculptor Douglas Senft, artist and project juror Bill Reid, and North Vancouver Mayor Jack Loucks at the ribbon cutting ceremony in May 1986. 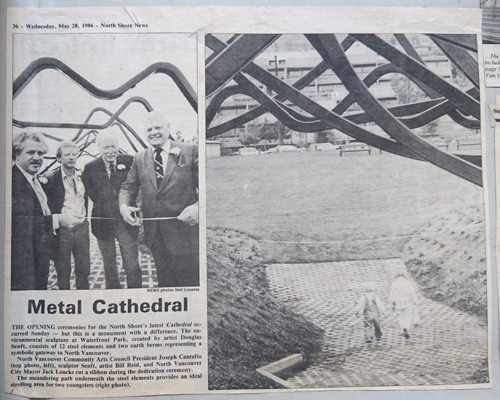 For further reading about the sculpture:
Stories in steel, by Christine Lyon, North Shore News, September 15, 2013