Extreme Carved Pumpkins
Lynn Valley Centre
October 23 - October 31, 2020
North Van Arts is pleased to partner with the Lynn Valley Centre for an exciting new Halloween event for kids and families to enjoy while visiting the mall. 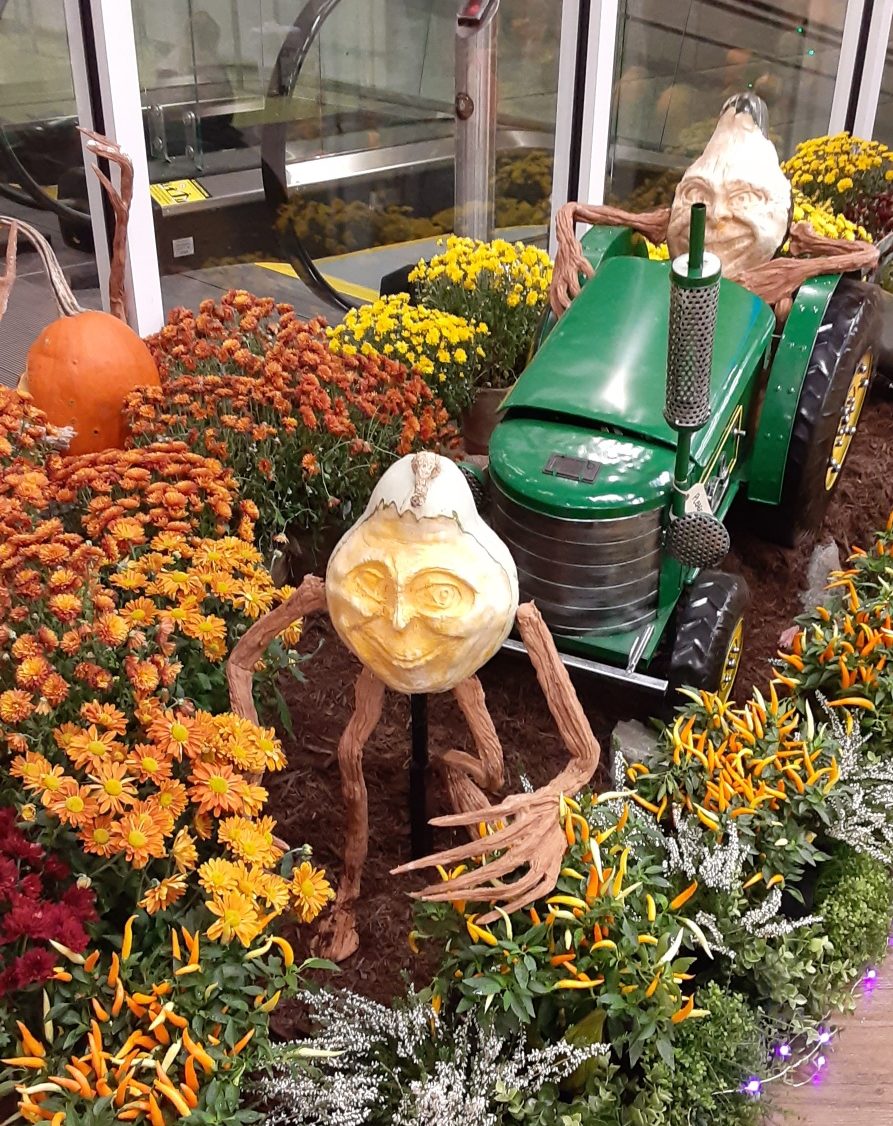 Everyone is encouraged to vote for their favourite pumpkin carving in the “People’s Choice” at Centre Court. You could win a $200 Save-On Food gift card with your vote. One random draw will be held. Vote before Saturday, October 31, 2020 before 5:00 pm.

Majid Sheikh Akbari creates sculptures from wood or spare materials from building sites or byproducts of other processes including re-bar, scrap metal , ceramic, copper, glass and nuts & bolts. This approach significantly reduces the ecological footprint of his sculptures while protecting the integrity of his intended design. Majid’s work embodies themes of ‘Spirituality’, ‘Environment’ and ‘Life’,

reflecting his personal interests. Born in 1954 in Tehran, Majid graduated as a civil Engineer from Tabriz University in 1977. Working as a civil engineer did not fulfill his spiritual needs, so he began self-studying in Art and Architecture. Inspired by Mystical Poetry, he eventually shifted from engineering to art & architecture. Majid considers his architectural work first as art, then for its functional purpose of office, gallery or residence. One of his residential buildings was among the nominees of the Aga Khan Award for Architecture in 2013.

Rick Herdman was first introduced and fell in love with printmaking and sculpture at Capilano College, Emily Carr College of Art and Design, and at the University of British Columbia. Years as an Art teacher in the Coquitlam School District and later his years working as a General Contractor, in construction, have guided his approach to the technical based mediums of printmaking and sculpture. In addition, Rick has worked as a studio technician for a variety of artists, and as a contract artist in the film industry, and as a specialized commission artist. Nature dominates Rick’s imagery, structures, and concepts. These are gathered from his wanderings throughout the province.

Billy Would Designs, established in 2007, offers unique jewellery and accessories handmade in North Vancouver, BC. Growing up in rural BC with artist parents (father a master woodcarver) Adea Chung naturally developed a passion for art and design. Self-taught, she mainly works with wood to create one of a kind pieces that represent a love of nature, clean lines and a strong focus on sustainbility. Each piece is carefully designed and created using only recycled skateboards and reclaimed hardwoods. A west coast minimalistic feel that’s anything but simple. Special care is given to design, creating as little waste as possible. Jewellery is accented with sterling silver or 14k gold fill (unless otherwise marked). Through Billy Would Designs, Adea has had the opportunity to facilitate workshops, mentor youth, participate in various events and collaborate with other artists.

Michael Binkley, has been a self-represented professional artist for over 40 years. Primarily known for his stone sculpture, Michael works in other mediums as well. His gallery and studio are in Squamish, BC and he welcomes visitors to come to experience his work first-hand. You can also visit his website. Michael lives here in Lynn Valley and is pleased to contribute to this year’s Lynn Valley Centre Halloween celebrations with this pumpkin carving.

Hayley Nicole Crichton, is South African born, has lived in the UK and New Zealand, and now calls Vancouver home. She studied Studio Art at Capilano University, and has a Fine Arts degree from Emily Carr. Hayley enjoys working in a variety of disciplines, trying to use sustainable materials wherever possible. Most recently she has been making reusable masks from fun fabrics in the hope that people will use less disposable masks. She also has a candle company called Happy Nomad Candles, and will be making her beaded cloud wall hangings in the near future.

Xwalacktun OBC (born Rick Harry) is a Squamish Nation artist accomplished in wood, paper, stone, glass and metals, and whose works have been awarded and recognized internationally. Born and raised in Squamish, he carries with him the rich ancestries of his father’s (Squamish Nation) and mother’s (Kwakwakw’wakw Nation) of the Coast Salish clans. His father, Pekultn, carried a hereditary chieftainship from Seymour Creek in North Vancouver. He would like to acknowledge Capilano College and Emily Carr College of Art for teaching him the skills to have a start in his career. Healing, growth and raising an awareness of the environment are central themes in Xwalacktun’s work. By focusing on how the traditional stories relate to his own life, he suggests to us how to use this ancient knowledge to help heal ourselves and our community. Early in 2013, he received the Queen Elizabeth II Diamond Jubilee Medal and in 2012 he received the prestigious honour of the Order of British Columbia (O.B.C.) for his many contributions to various communities.

Mike Valeroso graduated from BCIT as an Aircraft Maintenance Engineer. He currently works full-time as a helicopter mechanic at Heli-one/CHC and as a part-time automotive service technician. Michael’s artistry is self-taught and he works as a freelance ‘Carving Artist’ specializing in carving pumpkins of various sizes. Michael has been carving pumpkins for about 12 years and it all started when he entered a pumpkin carving competition called the “YVR Pumpkin Carving Contest”. This competition sparked his interest and urged him to learn more about the particular craft of pumpkin carving. Besides pumpkins, Michael also carves using other mediums such as Styrofoam, Metal and even Snow sculpting. Michael’s ultimate dream is to be on television competition shows such as Halloween Wars or Outrageous Pumpkins.