Anne-Marie was born in Edmonton but spent most of her youth in Florida and California. She graduated from the University of California, majoring in both Art History and French Literature with a minor in Fine Arts. She then moved to Montreal where she obtained her teaching credentials from McGill University. She is now retired from a 30 year career in teaching.

The North Shore Artists’ Guild awarded her a Certificate of Achievement and Honourable Mention for the painting “Grecian Windmill”. Her paintings have often been chosen by the Auxiliary to BC Children’s Hospital to appear on their holiday cards. The painting, “Harbour Fog,” was selected as a winner of the Port of Metro Vancouver Contest in December 2008.  “Harbour Fog” was also a half page feature in the Vancouver Sun on December 3, 2009.  Two of her paintings, “Reflections” and “Home” were chosen to appear in the Macdonald Realty 2012 Calendar. Warner Brothers have chosen two of her paintings, “Seaside Relaxation” and “The Prairies” to appear in their 2014 movie, “Godzila”. Many of her paintings have been sold here in Canada as well as internationally in the United States and Europe.

Currently Anne-Marie lives and paints in West Vancouver and on Mayne Island. She is an active and past executive member of the North Shore Artists’ Guild and an Active Member of the Federation of Canadian Artists and the North Vancouver Arts Council. 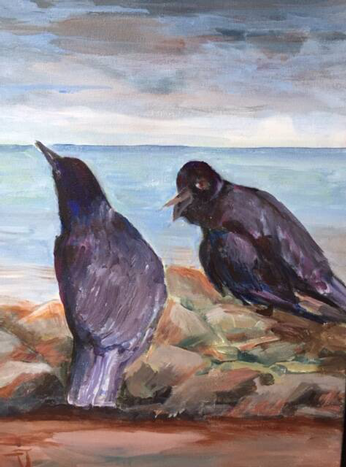