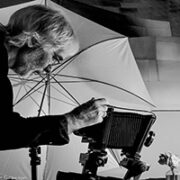 Axel Breutigam is an international award-winning photographer; a German-born Canadian, located in Vancouver, BC.

Among others Breutigam studied under Alan Ross, Ansel Adams’ former assistant, and the exclusive printer of Adams’ Yosemite Special Edition Negatives. Under Ross, Breutigam enhanced his technical skill and was taught how best to use digital processing techniques that emulate the darkroom prints of earlier decades.

Breutigam has established himself as a black & white photographer with a distinct and technically sophisticated style. Intriguing perspectives, bold lighting and abstract shapes are characteristic of his evocative, timeless compositions.

Since 2014 Breutigam had seven Solo Shows and took part in eleven Group Exhibitions in Canada (Vancouver, BC; Calgary, AB) and the US (Portland, OR; Palm Springs, CA) plus several online shows.