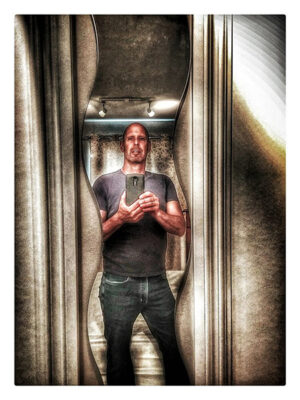 My creative background began with post secondary studies at B.C.I.T., David Thompson University Center and the Sheridan College School Of Visual Arts followed by a year of commercial portfolio development with a focus on fashion, people, travel and sports. That set me up to pursue my twelve years and career in the conventional chemical based commercial photography industry while based in both Toronto and later Vancouver. My assignments had me working across Canada and internationally for numerous clients in the consumer magazine industry, advertising industry and in corporate communications and retiring from the industry in 1997. In 2005, well into the digital revolution, I began to explore PC’s and computer software leading me to the creation of new works that were software based and eventually creating illustration, painting and geometric visual art works between 2006 and 2019. In 2012, I obtained my first smart phone camera to begin creating imagery that is more impressionism than realism as I strive to create more of a dreamscape than a reality through my interpretive work that is often focused on mostly natural elements. In addition to the above, I have also spent considerable time on various creative concepts that require substantial capital to further evolve. Should I ever win that Lotto Max jackpot, I know what creative  path I will be pursuing in the future.