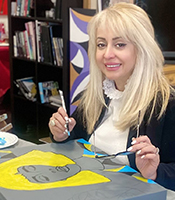 Nilufar Moayeri is a painter and art instructor with more than 20 years of practice. Nilufar was born in Tehran but spent her life in Turkey, where she eventually became one of that country’s most prominent artists and art educators. She started studying art at a very young age and began to realize her deep connection to visual arts. She holds a BA in painting from Mimar Sinan University, an MFA in Fashion Design, and PhD in Cinema & TV from Beykent University. She has taught drawing, painting, and mixed media visual arts for more than 20 years.

Nilufar continues to create her own art and teach drawing, painting and mixed media classes  at her North Vancouver Art Studio. In the past she, has taught numerous art classes at Pera Fine Arts Academy (Istanbul) and Palazzo Spilelli Academy of Arts (Florence, Italy). She served as the Academic Driector of Visual Arts Department at Pera Fine Arts Academy for a number of years and contributed towards many European Union Academic Art projects.

Nilufar has founded a few creative Art and Design Competitions for art students and young artists in Istanbul in 2000 which are still ongoing on a yearly basis. She has curated and organized many exhibits for local and international artists (in Vancouver and abroad). She has designed costumes for many professional Theatre plays in Istanbul including one which she was nominated for Best Costume Design in the 2009 at the Afife Jale Theatre Awards, Istanbul.

As an artist, Nilufar has been inspired by ancient Mesopotamian goddess figures. Her art explores elements of emotion, timelessness, attraction, and repulsion in existence. Nilufar’s work has been displayed in numerous group and solo exhibitions in Vancouver, Toronto, Istanbul, New York, Paris, Peking, Florence, Rome, Milan, and Brussels.

Nilufar has has also written and directed a short film titled, “Amore Mio Firenze”. The movie was shot on location in Florence, Italy.