From time immemorial, this land was home to the Squamish and Tsleil-Waututh peoples, where they lived and harvested the waters and land for fish, shellfish, seaweed, berries and plant materials.  The indigenous people have always had a deep, meaningful and respectful connection to the land. When European settlers arrived, they also saw the great potential in the land and logging operations began by the mid-1800s. 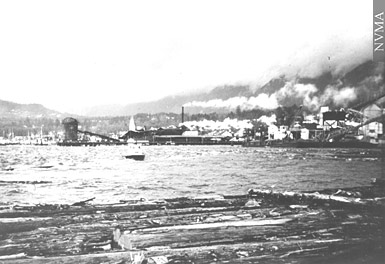 The first sawmill on the inlet opened in 1865 at the mouth of Lynn Creek, and many others followed.  In the area where waterfront park is today, the Horne Brothers Shingle Mill operated from the early 1900s until the late 1960s.  When the mill closed, Roy Horne, the last in the family to run the operation, purchased Paine Hardware and operated that former North Vancouver landmark until 1977.

After the mill operation closed, the area was redeveloped into a park, ready to greet visitors to the North Shore during Expo 86, with Lonsdale Quay adjacent, opening in 1985.

Waterfront Park quickly became an excellent vantage poin for taking in the Vancouver skylinetMore recently, Waterfront Park is the part of the Spirit Trail that connects the Squamish Nation waterfront to Lonsdale Quay.

Already in 1983, the North Vancouver Community Arts Council identified the “the addition of a major sculpture at the Lonsdale Quay Waterfront Park will contribute greatly to the emergence of the North Shore as a vital cultural and heritage area” (NSNews, 14Dec 1983)

Since the park was established, it has become a favourite site for strolling, picknicking and large and small scale events throughout the year, such as the annual Canada Day celebrations, Philippine Days Festival (pictured here), Caribbean Days Festival, the Father’s Day French & Italian car show, and in 2017, ART+PLACE! 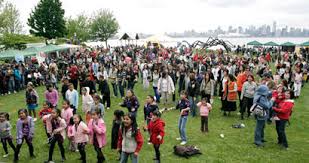 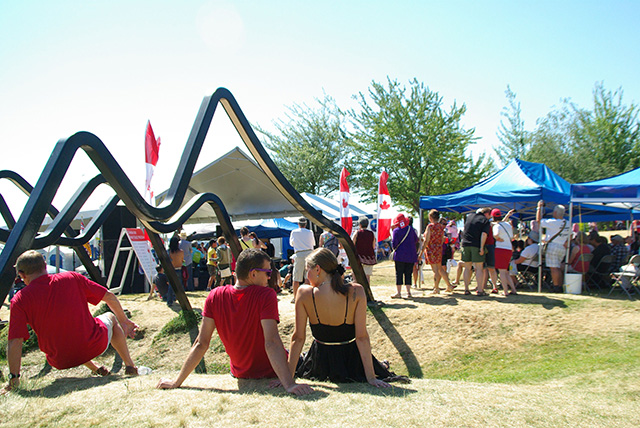 About ART+PLACE About The Sculpture About The Artist